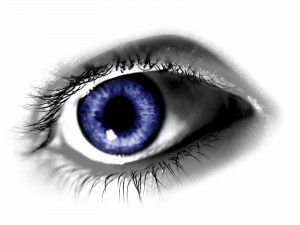 Did Neanderthals become extinct because of the size of their eyes?  A new study suggests that could very well be the case.  According to the study published in Proceedings of the Royal Society, a Neanderthal’s eyes were approximately 6mm larger than modern day humans.

I know this seems like a small amount, but it was enough for Neanderthals to use significantly more of their brains to process that extra visual information.  The result was that Neanderthals evolved a much larger visual processing area at the back of their brains – not the area of the brain responsible for higher level thinking and problem solving.  This could explain why they died out about 28,000 years ago in part due to an ice age according to the study.

Homo sapiens developed the problem solving abilities to create warmer clothing which is in part why they survived.  There is archaeological evidence that Homo sapiens that coexisted with Neanderthals had needles that they used to make tailored clothing.

Just think, if vision therapy had been around 30,000 years ago we might still have Neanderthals walking around.  We could have showed them how to more effectively use their visual processing abilities while enhancing their critical thinking.

The complete study can be found here:  Proceedings of the Royal Society B