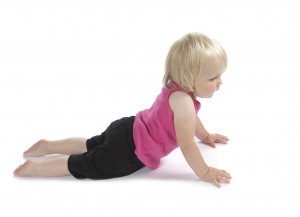 How important is crawling on hands and knees to a child’s motor development and learning skills?

There is some controversy over whether it plays a role in future cognitive and motor development, with some pediatricians telling concerned mothers not to worry if their child never crawled.  Pediatric physical therapists will tell you that crawling helps to strengthen the trunk, shoulders and hand muscles, influencing muscle tone throughout the body. Crawling on hands and knees strengthens leg and hip muscles that will help when the child begins to walk.  Primitive Reflex experts have researched the importance of integrating reflexes involved with crawling and creeping and their relationship to learning and behavior. Each developmental motor skill helps forge the next stage of development.

The mechanics of creeping stimulate different areas of the brain that are important for future learning.  The repetitiveness of these movement patterns help stimulate and organize neurons, interweaving both sides of the brain with the contra-lateral movements involved in the creeping movement.    The infant is learning how to use the two halves of the body independently when crawling on their tummies and then learn to synchronize both sides of the body when creeping.

How do these movements relate to our visual system?

Eye-hand coordination is experienced as the infant begins to creep for the first time, using their eyes to lead their body in the direction of gaze.  The field of vision is now extended to objects in the distance.   Infants use binocular vision when creeping—their eyes guide them as they move forward. The infant will often look from one hand to the other. According to Sally Goddard Blythe, an expert in the field of primitive reflexes, “creeping is one of the most important movement patterns in the process of teaching the eyes to cross the midline.”  They will need to cross their midline when they read. They will look from their hands up to the object that holds their attention and then back down to their hands again as they move along.  This closely models the skill they will need later in school when looking from their paper up to the board and back to their paper when copying.

Research has shown (Pavlides 1987) that a high percentage of children with reading problems did not crawl or creep as infants.  Other research shows there is a strong correlation between crawling and creeping and the ability to comprehend and use a written language. Studies have shown that cognitive skills such as space perception and object permanence are learned during this period of crawling and creeping.

The visual system is complex

Early childhood developmental stages play an important role in future learning skills.  We have tested hundreds of people who have vision related learning issues.  The Symmetrical Tonic Neck reflex and the Asymmetrical Tonic Neck reflexes are both involved in these movement patterns.  Inhibition of a reflex often leads to problems with attaining a later skill.    Crawling and creeping are important motor skills that help set the stage for later motor and cognitive function.

So, yes, we believe To Crawl is the answer!